Not a lot to document today, I think. Mainly due to the stress later in the day.

I had such a good time in Berlin so I was hesitant to go but I knew we still had most of a week left to go. The destination today was Dresden. I'll copy from the brochure:

Our journey today brings us to Dresden – known as "Florence on the Elbe". On our arrival an orientation tour shows us highlights of this astonishing Renaissance city including the Opera House & Zwinger Palace. Later, why not take an excursion into the Elbe Valley to visit the Bastei Belvedere?

The first thing I noticed upon arriving is the gorgeous ancient architecture with all the columns & pillars & busts & sculpture & ornate detail set into every building more than 150 years old. There was a castle there right on the street that had an enclosed metal bridge over an alleyway right to the second floor of the Catholic church next door. It was said that since he was raised Lutheran but converted to Catholicism in order to marry, he wanted the bridge built so he wouldn't have to walk on the same ground as the Lutherans. Of course, the unofficial reason given is so he wouldn't have to walk all the way around, especially during the winter.

Further on was a new Lutheran church, recently rebuilt to resemble in exact detail the hundreds year old building that was destroyed in WWII. On the outside it looks just as it did back in the day, complete with fake aging of the stonework. The inside is very extravagant but feels a little more modern. I have a feeling they cut corners here & there, especially when I saw the veins in the "marble" were painted on. I was surprised to note there was no bloody, gory corpse of Christ hanging anywhere in the place. Something quite unusual to me. It was very pretty to look at but when I see structures like that I can't help but wonder how much good it could have benefited humanity had the cost of this building been spent on something useful like medicine. How many artificial hearts could that pile of money have installed? How many lives could have been saved (note: not "saved") through additional research into diseases? I heard a saying a while ago that fits perfectly: "The hands that help are better far than lips that pray." But anyway, like at the Cologne cathedral I snagged a candle as a souvenir & we moved on.

After the church there was an hour or two of free time before the next tour on foot. Dad & I walked around alone & found a couple postcards. He had a beer at Dresden 1900 & I chuckled at Ontario: Canadian Steakhouse. But as it grew closer to noon o'clock we headed back to the meeting place to begin the museum tour. We (thought we) found the place, waited, Noon came with the ringing of church bells all over & went. I didn't see our tour guide or anyone else in our group. So we began a frantic search of the area to find where we were supposed to be. We walked all around, retraced our steps, wandered this way & that, all the while our group was leaving us farther & farther behind in my mind.

Dad was getting really frustrated & finally had enough. We didn't have to actually be anywhere important until 2:30 so he asked me to take him back to the Dresden 1900 to rest while I ran off again in search of our group. I knew we would be noticed as missing from the noon o'clock museum tour & if I didn't find anyone by 2:30 when the bus left the area I knew we would be screwed. I traced our steps once again & hurried around in the open-air museum to see if I could spot them there somewhere. Eventually I decided to just find a phone & call our guide Ingrid on her cell since I had the number. Easier said than done. I could not find a single pay phone anywhere I looked. Not on the streets, not in a hotel or multi-story mall I found. This is when I started getting flustered. I finally went back to the tourist information building that I discovered on our first frantic search to ask where the nearest phone was. The attractive young woman procured a map & examined it for a couple minutes with a college before pointing out two locations several blocks away. I had to point out that I was running out of time & that it was a bit of an emergency & then she just turned around the phone on her desk. But my call to Ingrid wouldn't go through! She is from Austria & so is her phone number so my kind host at the Info building had to find another that would go through. So finally I called & explained to Ingrid what happened & where I was, she consulted with Heidi who knew the area better & I looked out the front of the building to see her waving across the street, ready with the 1:15 tour group. So while Dad & I were all alone wondering where we were supposed to be earlier, everyone else was a mere half block behind us. I was more relived I can say. I ran back to grab dad & we hurried on to the museum, none too late to start the next tour.

The museum was in a part of the castle I mentioned earlier & one of the optional tours, "Art treasures of Royal Dresden." I was a little too rushed & relieved to pay much attention to much of what our guide, Heidi, was saying, but when I did she was usually focusing on something less interesting than what I was reading on the plaques of whatever exhibit caught my eye. It was no matter anyway because halfway through the tour I tried adjusting the radio headset we each had to hear her & accidentally turned it off, thus resetting it & rendering it useless. Anyway there was plenty of rich stuff there. Elaborate pieces of intricate art. Mugs carved of ivory, jewel encrusted this or that. An animatronic warrior on horseback that would ride around on the table after dinner & shoot arrows to determine the next person to speak. I'll find a link to the museum later if I remember because not a lot sunk in after the hectic rush earlier, but the real attraction was the world's largest (& possibly only) green diamond. It's as big as the tip of my thumb & twice as valuable. It gets its clour from exposure to natural radioactivity. I suppose I'd better get more information on the museum because I know Mom would have loved it. 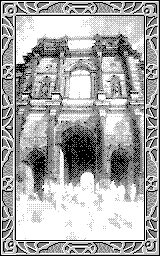 Across the street is the Zwinger Palace whose remaining outer wall & garden filled courtyard forms a magnificent part of the attraction.

The next optional excursion was to Moritzburg, quite literally a hunting lodge for rich weirdos. The large edifice has been partially restored due to damage during the war so the front exterior wall was made of poured concrete walls rather than traditional brick & mortar. The bricks then, were painted on, much like in a Richard Haas mural. It's a neat effect but rather diminishes the historical appearance of the building. The structure was big enough to be a small palace which is appropriate considering it was built for Prince Moritz. It's mostly empty tho', with period furniture in the rooms we toured which circled the building on one of the upper floors. I didn't find it very interesting so I hung back for most of the tour & enjoyed the padded benches. I did however appreciated the "Hall of Monsters," a gallery of nontypical deer antlers, some natural & some engineered that way. One in particular crested the huge doorway to the gallery. The tips of its antlers had been split somehow so they opened up like flower blossoms. In retrospect I think I would rather have gone to the hotel & hung out with some of our other travelers instead of these optionals, but they were all right. I'm just glad we made it back safe.

The hotel was one of the best by far, if only for the incredible view from our room. It seems everyone had a great view from wherever they were & we were all trading stories that night at dinner. Some saw terraced hills of multi-million dollar villas, others were above the glass enclosed of the swimming pool (enjoyed by nude bathers) & our room looked over the hill our hotel was situated upon & down toward the city. A couple blocks away was the steeple of an ancient church & beyond, many clay tiled rooftops all the way out to the hills on the horizon. That night while writing postcards at the desk in our room I spotted fireworks off in the distance. It was a beautiful display & lasted several minutes. We both enjoyed it & inquired locals about them but never found out what they were for.
Collapse