It was another long bus ride but not quite so long as it was to Hamburg. On our way to Berlin we watched a documentary (high tech bus!) on the history of the separation of Germany following WWII, the split of Berlin & subsequent reunification starting in 1990. It was very informative & moving. I remember hearing about the events when I was back in middle school but never truly appreciated their significance until now. Both the split & the reunification really messed up the country. They're still recovering from the latter because once they reformed the lousy economy of the East sapped that of the West. It will probably be at least another generation or two before their economy finally heals.

The video really made me want to visit the Brandenburg Gate. It's a beautiful structure completed in 1791 & commissioned by the King of Prussia, Fredrick William II as a sign of peace. It is the the only one left standing out of many that were originally entryways to Berlin. Time & again it has been used as a symbol for peace & unity. Kennedy made his famous "I am a Jelly Donut" speech there as well as Regan with "Mr. Gorbachev, tear down this wall!" Clinton spoke there about peace in post Cold War Europe & Obama was a block or so away, if not at the gate too, making some speech or another.

The bus stopped at Kaufhaus desWestens in Berlin, an upscale department store where we had lunch at the food court on the top floor & were let loose for a couple hours to explore the area. The Kurfürstendamm, West Berlin's most best-known street is home to a number of landmarks, which is why I suspect we stopped a that particular area for lunch. One such landmark is the Brigitte und Martin Matschinsky-Denninghoff Sculpture, a large metal tubular form (each part as big around as a tree-trunk) intertwining around itself with the halves never meeting. Another symbol of the once-divided country & city. Locals call it "the intestines." 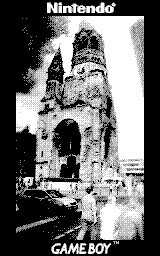 Down the road is the Kaiser wilhelm Memorial Church, also known as "the hollow tooth." It looks just that & I got some fantastic vertical pan shots with my Game Boy Camera. Much of it was destroyed when we bombed the shit out of Berlin in 1943 &now only the lower 200 or so feet remain. It's been left as such as another reminder of the damage done during the war, much like the memorial in Hiroshima. It's pretty ragged & grim but rather astounding when you consider that it's still standing 60 years later. Inside is a touristy area when you can buy souvenirs & postcards & such. The original mosaics still cover the inside walls, ceiling & floor with some obvious repair work. A new modern church was built to replace this one for actual church stuff & it stands in two parts on either side. One is tall & skinny, presumably the bell tower. And the other is short & squat, probably the chapel. Both are completely covered in blue wrap-around stained glass tiles. It looks really neat but out of place so close next to the semi-ruins. One or the other would look better in the same spot but having them together is probably yet another symbol for the city rising from the ashes of war.

At the main intersection at the end of that block is a bizarre sculpture in an inexplicable combination of two automobiles & concrete stated by the artist as some sort of sexual representation. Even our tour guide didn't get it.

On the way back to the meeting place I saw some street dancers break dancing to Michael Jackson's music. I made Dad stop so I could stay & watch them for a while. It was a beautiful day & I got some great pictures. But alas, we had to move on.

We met back at the department store & got on the bus for our orientation of Berlin. A local guide joined us so Ingrid sat back with the rest of us while we listened to Ita give us the rundown on the city. We traveled through both East & West which is pretty messed up since less than 20 years ago you still had the whole Communist & Wall thing. Except for a few areas where some old, soulless cold-war era buildings remain & various lengths of the Wall still stand the city is pretty much one piece now. There are some city streets that have a double row of bricks embedded in the pavement running wherever the Wall originally stood. We crossed back & forth many times just in traveling from place to place.

Naturally we stopped at the Brandenburg Gate in our orientation. It was even more beautiful than in the videos, no doubt aided by the fact that it was privately refurbished in 2000 for $6 million. The area is foot traffic only, much like State Street. Also like State Street was a gaggle of sightseers, musicians & locals just there to hang out. A gentleman in East German Police garb at a table next to a display where you could get your photo taken with a soviet flag & woman in uniform was selling souvenir passport stamps. Here, you could legally have your Passport marked with any one of many significant areas of the country. Being currently in East Berlin & headed toward the gate where the borderline lay, I had mine stamped for exiting East Germany. (Those without passport handy could also take home a souvenir visa.)

A couple months prior back at home I found a neat little black bag at Ragstock. It had an important looking insignia & the word "SHUTZPOLIZEI" printed on the outer flap. I didn't know what it meant but it looked neat & I used it all the time back home. I brought it with me to Germany since it's much handier than dragging around my backpack when getting on & off the bus all day. The fellow at the East German checkpoint took special notice of it & asked some questions. Then came the shocker. Little did I realize I had brought back to Europe a (possibly vintage) East German Special Police bag! A rather fitting coincidence, but an even more extraordinary one was yet to come once we reached Munich.

Time was (as usual) limited but I had to go through the gate. I couldn't learn so much about it in one day & not get near it. I walked all the way through from East to West, took a great deal of photos, both colour & with the Game Boy, then use the video capture feature on my camera to record my walk back through. It wasn't nearly enough time but I took heart knowing that our hotel was said to be a 15 minute walk away. We were staying two nights in Berlin so I was pretty certain I would have time to return.

The bus paused again a couple blocks away at the Underground Library. Not so much a real library, it's a memorial on Bebel Platz to commemorate the Nazi-ordered book burning of May 10th, 1933. From a distance it just looks like a plate of glass embedded in the center of a cobbled courtyard. When you come nearer it becomes evident that it's a window looking down into an underground chamber. It's a square, white room lined completely with bookshelves. The shelves are all entirely empty. There is enough room to house 20 – 30,000 books, the estimated number that were burned that horrible day. I was particularly moved, & as I waiting on the spot for my turn to attempt a photograph of the memorial my mind whirled back in time to find myself standing amid a mountain of books topped with a pillar of flame & smoke as leaves of white curled to black & soared into the sky of that evil night. Foreign voices cheered & shouted as more bricks of knowledge & history were hurled at the pile.... My tour group had moved on, the bus was running. On our way to the hotel Ita quoted Heinrich Heine, "Those who burn books would also burn people."

After settling in at the hotel we got ready for the optional extra outing on a scenic drive to the green outskirts of the city, which were used as the Royal Hunting grounds in centuries past. Today it's an exclusive residential district & where we found our chalet-style restaurant for a formal dinner on traditional German specialties. Our dining choices were decided hours before while still on the bus to Berlin. This is because one of the dishes requires four hours preparation time. Guess what I ordered.
Drinks were unlimited & some of the group took full advantage of this. Not really spectacular considering I only drank water from the pitchers on the tables or "Coke Light."

There were four choices from our special menu. Dad ordered trout which was stated to excellent. Being a rather fancy dinner Dad vowed not to use his fingers or suck on the bones but the meat was so tender it just scraped right off cleanly with a fork. Mine was the same, tho' I didn't order the trout. I had the dish that took four hours to prepare. I ordered the pig knuckle!

I'd never had pig knuckle before. I wasn't even sure which part of the pig it was from -- tho' presumably some part of the leg or feet, which conjured up images of jars at the grocery crammed horrifyingly full with pickled pig's parts. -- The server set it down before me & all I could do was stare. It was just a plate with a blob of rolling pink flesh. The mashed turnips & sauerkraut was served in a dish on the side, presumably so the hideous mass could rhythmically undulate with that much more freedom. It takes so long to prepare because it is boiled for four hours to make the meat so soft & tender. This makes it a bloated, gelatinous misshapen.... um, food item, which I was currently preparing myself to eat. It looked like an enormous water-filled ear. I wish I had taken a picture of the thing because it was really just magnificent. No! I wish I had recorded video of it to share with everyone back home. Maybe I can find something on YouTube later. Anyway, not to be put off I dug right in & the first bite conformed what I knew all along. It was pork. Delicious pork. It was better than any Easter dinner or ham sammich I had ever had. I never knew meat could be so soft; it was nearly a liquid. In fact, it was hardly meat at all & more of a tasty pork pudding! I declared this aloud to my dining companions who were trying to distract themselves with their own meals. (There were only like three people in our group that had ordered pig knuckle & they were currently seated at other tables.) Dad was happy enough to try some & enjoyed it. He even ordered a half pig knuckle with cracklins one night in Munich. There was quite a bit of knuckle so I didn't finish my side of kraut & turnips, but if I find a place locally that serves pig knuckle as good as the one I had there I'm treating friends!